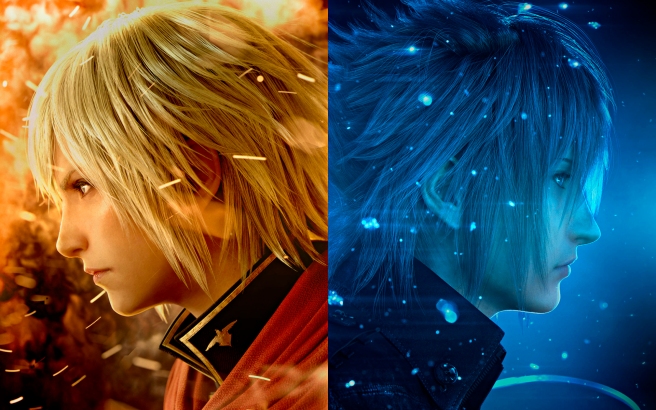 In perhaps a blatant show of my gaming preferences and fan boy loyalty, I completed FFXV mere days after posting that Type – 0 review, and playing both games so close together got me thinking about an aspect of RPGs I had never considered: the actual size of an RPG’s party really does have an considerable affect, way more than I had given it credit for.

Before we dive headlong in, let’s make sure we’re all on the same page. A ‘party’ in this context basically just refers to the main characters that take centre stage in a story, and in a game the party usually consists of the playable characters. HOW the party is playable usually varies depending on the game; sometimes the entire party is controlled by a single player, one character can go to one player each in a multiplayer game, or only one character is controllable while the rest of the party is handled by AI. To make things slightly simpler to compare, we’ll start with two games that both use the lattermost scheme for the most part (and came from the same company AND even the same series; I really lucked out with this analysis). After that, we’ll look at some more general examples, and how the sheer number of people in the main cast can affect the game they’re taking the limelight in.

I said in my review that I didn’t feel as if Class Zero from Type-0 ever really developed individually; they made a pretty cool unit of students, but the singular characters from the class mostly remained in the same state that we found them in. While they all went through a few motions as the story progressed (learning to better appreciate each other, and collectively learning that they didn’t have as much free-will as they first thought), their individual characteristics were fairly one-note even by the end. While this is a criticism, I understand the logic behind this outcome, namely that it would have been pretty difficult to fully flesh out and give a whole bunch of characterisation to over fourteen ‘main characters.’

In comparison, the four ‘Chocobros’ from FFXV are at least somewhat more developed by the story’s end, and a lot of that development is shown through their interactions with each other. Without spoiling too much, it definitely feels like the already tight-knit group had grown even closer by the time the credits were rolling, or at the very least the player had been made to understand their bonds by the end. The game goes out of its way to reinforce the intimate comradery between the four, and it really pays off. Likewise, the group feel like they had more character to show off through the run of the game; Ignis may be the most reliable and level-headed one in the group, but even he isn’t above teasing Prompto like the rest of the crew.* FFXV has an almost unfair advantage in this regard, since it only needed to characterise four main characters, but the difference is noticeable. It can also not be understated how much these characters endear themselves to the player, and how much they add to the ‘fantasy road-trip’ tone the early parts of the game has. Their interactions and banter with Noctis is always entertaining, and the game world would have felt much emptier without them following behind the player. Their open trust and appreciation of each other, even when they’re butting heads, creates a real feeling of intimacy with them: by the end of the game, you’re as glad that they travelled with you as much as Noctis is. Heck, the greatest criticism I can think of for the recently released ‘Moogle Chocobo Festival’ (which is otherwise good fun) was the fact that the ‘bros’ weren’t present.

(*I present exhibit A: https://www.youtube.com/watch?v=j4oLcVnTR_o )

So in terms of story and plot strengths, FFXV’s close-knit and forefront party feel more engaging and involved in the narrative compared to the more thinly spread Type-0’s. However, how do the different parties affect the actual game play in these video games?

While they all follow similar principles and a basic structure (namely, aim for the Killsights when possible, or use magic and abilities as your main source of DPS), the fourteen members of Class Zero all have noticeably different play styles, and a pretty varied set of abilities. To this end, there’s a play style for everyone in here, and you’ll quickly be able to pick out your favourites. If you want a precise ranged fighter that benefits from picking his timing carefully, you would look for Trey; if you want a character that just goes in swinging, and smashing the crap out of everything, Cinque is more your flavour. Likewise, since you can determine the three-person team that goes into battle yourself, there’s a number of team compositions that can be made, and even some effective team-ups that can be created: Cinque’s ability to stun from long range isn’t super useful by itself, since Cinque moves a little too slowly to cover the distance effectively, but having a much more flighty and quick character (like Eight or Queen for example) means that it be a pretty dangerous attack. The game even encourages this, to a certain extent, since you can only use two of a character’s extensive list of abilities, you greatly benefit from making sure your team composition is well balanced. Even if Class Zero’s characters aren’t the most developed ones in the world, you have to admit that the motley group make for some entertaining gameplay options.

In comparison, FFXV’s four protagonists are more limited. You’re stuck playing Noctis the entire game, and while he does have access to every type of weapon possible, they all function almost identically (and your enemies will always be weak to a particular one, which will often be the deciding factor in which one you use more than your preferences). Aside from some underwhelming ranged weapons, your tactics will ALWAYS be ‘run to the rear of the enemy, hold circle and hope for a Link-Strike,’ regardless of weapon choice. The three bros are similarly more limited in their load outs, being able to equip only one technique out of a middling pool of options, and with no way to control what actions they take otherwise (at least until the DLC drops). While their AI controlled move sets do improve as you sink more Action Points into them, and the game occasionally spices things up by adding a fifth guest character, it feels like your working in a pretty limited environment. There IS an insane attention to detail, such as how every single member of the group have different animations for their Link-Strikes with Noctis and how they all have voice lines for damn near every status effect in the game. This even extends to the guest characters, which are often present for less than an hour at a time. It’s actually a pretty impressive way to characterise the heroes even during gameplay, but doesn’t do much for the otherwise pretty limited system.

Now these are only two, very specific examples. I’m not going to make any broad stroke claims like party size is always going to be indication of where a developer’s focus laid, or that a large party can’t be well developed or vice versa. Heck, just for the record, I came to really appreciate Class Zero by the end of their game; for all their faults, they’re a likeable group, and their story becomes pretty compelling by the end. But there’s no getting around that the number of characters in an RPG’s party creates different problems, and likewise make certain challenges easier. Having more characters accessible at any one give times allows a developer to specialise each character to certain play styles without risking the player getting stuck: if a single character isn’t viable or fun for the player, they can simply be switched out for a different one. On the other hand, having a large cast can make it difficult to give each and everyone an equal amount of plot relevancy. Some RPGs will just have a core cast that actually matter to the story, and all of the supporting characters are there mainly for gameplay purposes (see the Suikoden series, which has you collecting over 108 characters for your merry band).

There are games that have the best of both worlds, in one sense. The old Final Fantasy games and the more recent Bravely Default games use a ‘job’ system that allows the player to customise the four-person party in numerous and often drastic ways, allowing the story to keep a sharp focus on four key characters without sacrificing the possible gameplay variety. This system does offer its own problems, since it can make it feel like none of the four main characters have much of an ‘identity’ in how they’re played, and raises the question of just how the hell these four chuckleheads learn all these different classes so quickly. Still, it’s a happy middle ground that, while not perfect or recommended for every game, I’m glad has made a minor comeback with the Bravely series.

On the other end of this entire spectrum, it’s worth considering the effects that having no party at all can mean in an RPG: the Dark Souls series has your character go through most of their trails completely alone, a single person going up against horrific beasts and fallen god-beings. This ties very well into the games’ melancholic and lonely feeling, as well the high difficulty the games are known for, since having just one travelling companion would drastically change the tone the game has. While you can summon NPCs and other players to help you, the fact that they often appear as extremely out-of-place glowing figures (unless equipped with certain rings and such) helps reinforce the idea that they’re not natively part of the player’s world. The fact that you have to summon someone through time and space just to fight with you creates this feeling that even though there’s someone actively trying to help you, you’re still very much doing this adventure alone.

I’ll freely admit that I made this loose analysis more for my own sake than anything else, since I had never stopped to think about just how much of a game’s entire gameplay and story were affected by the seemingly simple number of characters that make up the playable/main cast. This is definitely something that can only really be judged on a game-by-game basis, there is no inherently superior way of making a party composition. Here’s a fun idea: the next time you’re playing an RPG, try to image the game with a larger or smaller party than the one that’s currently present, and how much that would change. Would the story be any different, or would the gameplay be heavily affected? Would those changes make the game anymore fun to play, or would it take something away from the experience?

Thanks for sticking with this little splurge of thought; next week we’ll return to our usual scheduled review. Get those colourful suits and impractically brutal Heat Moves warmed up, because we’ll be stopping off into the wonderful world of Yakuza 0.

One thought on “The Importance of Party Size: mechanics and versatility vs. focus and intimacy in an RPG.”